Perhaps the biggest challenge facing our society when it comes to mental health matters is a lack of knowledge (also referred to as "awareness"). In Australia we have come a long way in recent years thanks to campaigns being run by governments and not-for-profit organizations such as Beyond Blue and the Black Dog Institute to raise mental health awareness. But we still have a long way to go.

The stigma associated with mental illness remains a major barrier to people getting the help they need. It is very understandable why someone experiencing trouble doesn't want to seek help. He or she might feel embarrassed or fear being judged by others, or not feel comfortable sharing with healthcare professionals they don't know well, or simply not know where to begin and conclude that it is just too difficult.

A major reason I am motivated to write about this stuff is that I want to help fill people's knowledge/awareness gap. One barrier this blog can overcome is privacy. A person might want to learn more about mental health matters (be it for themself, someone they know or for general knowledge) without having the world know they are doing so. You can read this blog without anyone else having to know, which might be important for at least some who are reading this.

At school I was one of the pesky students who asked a lot of questions. They were usually of the fairly basic "let me get this straight" type. More often than not I sensed others in the class were happy that I had spoken up as it cleared up things for them as well. Accordingly, I will try to speak as simply as I can about mental health matters on this blog because I have found that covering the basics on any important topic is seldom (if ever) a waste of time.

In coming posts I will begin covering some important definitions that I think are good to have clear in one's mind.

Here is one of my all-time favourite music videos. Enjoy!

My story - in brief

I want to introduce my story by referring to the Academy Award winning film A Beautiful Mind starring Russell Crowe and Jennifer Connelly which is based on the true story of mathematician John Nash. Without prior knowledge the viewer thinks that they are watching the dramatic story of a man working in top secret intelligence who becomes entangled in the attempt to prevent Soviet forces waging nuclear war on America.

Mid-way through the film the viewer discovers that what they had been watching was the world through the eyes of someone with psychosis that had not yet been detected. The real and the imagined had up to that point in the film been indistinguishable. It was apparent neither to Russell Crowe’s character nor the audience that there was any distinction to be made.

The turning point of the film happens in a psychiatric hospital where Nash is told he has schizophrenia. In one of the most poignant scenes of the movie, Alicia Nash (played by Jennifer Connelly) tells her husband that far from the world facing nuclear Armageddon, it is all in Nash’s head.

It was the same for me, only in my case the diagnosis was bipolar disorder. Like Nash, I took a lot of convincing that I was sick. I had come to believe over a series of weeks before the hospital admission that I was a sub-human creature. So unthinkable was the idea to those around me that like Nash I kept from sharing it with anyone because of course they would not believe me.

I had come to this frightening place as a result of a mental breakdown that had gone undetected for three years. That time period was bookended by two events that for me changed the world as I knew it. The first was one that hit a lot of people hard: the terrorist attacks of September 11, 2001. The other event took place while I was living and working on my family’s sheep property in 2004. After two mentally rocky years living in Sydney studying at university I had had to pull out due to an eventual inability to attend class and complete assignments.

As we struggled to determine what exactly was wrong, working on the farm made sense as an alternative to sitting around the house. Unfortunately, that year it involved handling sheep suffering the effects of extreme drought. In an important sense the world around me was mimicking what it had done on 9/11: it had turned itself upside down. My mind responded in kind.

During that stay in hospital I came to grips with having a mental condition. It took me two months until I was ready to return home, and a further two years of rehabilitation before I could return to Sydney to resume my studies in 2006. In my first semester back I took one unit of study instead of the normal load of four. I eventually completed my degree in 2009 and last year found employment, successfully operating at full-time capacity.

As I mentioned in my first post, I consider myself to be a bit of a field study in matters of mental illness and recovery and I hope that this space can be one that offers others useful insights on the reality of living with a mental condition.

Here is the trailer for A Beautiful Mind

This blog seeks to provide positive insights into the reality of living with a mental condition. As someone with both bipolar disorder and a love of writing, it seems only natural that I create this blog.

I intend to use my own life experience as a bit of a field study for anyone following this blog. I do hope it can be a useful resource for anyone whose life has been touched in some way by mental illness. I also hope that in time it can become a forum for people to share their ideas and insights as well.

The title of this blog is a slight play on words of a book called Meditations in an Emergency by the post-second world war New York poet, Frank O'Hara. The photo below is of me as a sixteen year-old mugging for the camera from the top of the World Trade Center in 1998. I look forward to explaining its significance in coming posts. 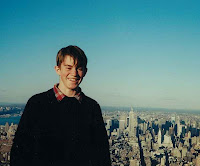