I recently watched a documentary about the earthquake that earlier this year devastated northern Japan. It included footage taken by someone in Tokyo who happened to have their camera out when it happened. The footage showed the ground around the person's feet cracking open.

I was surprised to find myself a little disturbed by seeing the footage even though there was no sign of harm to the person doing the recording or anyone in the vicinity. It made me think about a time earlier in my life where watching TV footage caused one of the most frightening experiences in my life.

Early in the morning of September 12, 2001 (Sydney time) I awoke to my normal routine of getting up, making breakfast and preparing for work. As usual I switched on Andrew Denton's breakfast show on Triple M and instantly noticed a very different demeanour from the usually chirpy radio host. Something was wrong. I quickly went to the living room and turned on the television. There was an American news anchor fronting the camera with what looked to be the late afternoon skyline of New York City in the background. Again there was something wrong with what I was seeing.

The next image confirmed the rising dread I felt: a black plane (I would later that day learn it was a passenger jet in shadow) was shown flying low over Manhattan and crashing into one of the Twin Towers. I instantly recognised the buildings not only because they were world famous but three years earlier I had stood atop the viewing deck of one of them as an excited teenager. 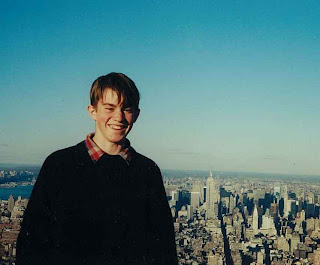 What followed was a recap of what had happened some six or seven hours earlier but was fresh to my eyes because I had been sound asleep when the attacks took place. Before my eyes the World Trade Center crumbled. It may as well have been live.

What happened next was I had a panic attack (also known as an anxiety attack). How to describe this? Picture the world ending combined with your own life flashing before your eyes and you get a sense of where my mind was at that moment. Physically I was shaking, desperately wishing I could undo whatever it was I had done wrong to cause my life to be ending. Next I imagined myself in a jungle somewhere with an automatic rifle - a conscript in the armed forces fighting whichever country or countries it was who had sent the black (and presumably military) planes I had watched fly into the World Trade Center. Thoughts and images came quickly, unregulated by reason and totally horrifying. I was alone and beyond help, or so it seemed.

I looked out the window from my apartment and saw a woman in the neighbouring high rise block shaking a rug out of her window. It was probably the jolt of reality that returned me to earth. The next thought I had was who could be doing something so mundane when the world seemed to be collapsing? It was an image that has stayed with me ever since.

But back to the panic attack for a moment. In a lot of ways a panic attack is an internal earthquake. After experiencing it the mind becomes cracked and traumatized. And much like seismic activity it leaves a person's mental terrain fractured and fragile. On top of all this there are aftershocks - fresh panic attacks to return and terrify the person affected, complete with their sensations of Armaggedon/holocaust.

The person suffering from panic attacks is in many ways like a city attempting to recover from a massive quake but knowing another one could come at any moment and devastate everything again.

The application point of me sharing this is that a significant proportion of people experience panic attacks, and many people go a long time not realising them for what they are - a mental issue that can be explained and treated and recovered from. Many people are afraid of getting the help they need because they don't know what is happening to them, or think that they are going crazy or are beyond help.

The good news is that panic attacks begin to lose their power once the person affected comprehends that what they are going through is explainable, containable and are common to many people. This is not to say that panic attacks are trivial or a minor ailment. Even after identifying them a person can go for a long time still experiencing them in all of their horrible power. But knowing there were others out there experiencing what I was going through helped me a great deal. Knowing I was not alone made a huge difference to me.